Posted by Anne Witton on Saturday, May 26, 2018 Under: Random stuff 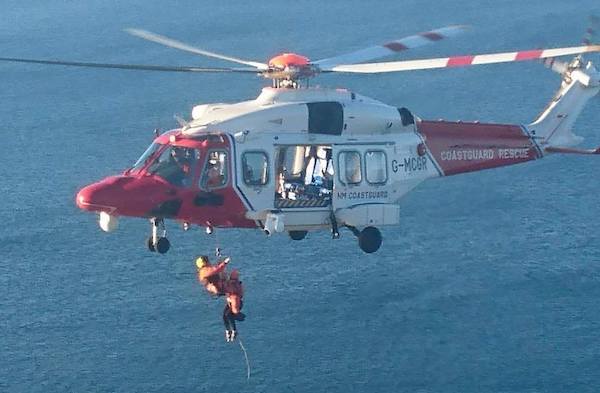 Abby and I had a lovely week in the Scottish Borders at the start of May, but it didn’t turn out quite as restful as expected, with me having to be airlifted to safety off a cliff! We’d walked along a coastal path to Siccar Point which has some fascinating geological formations. Abby wisely decided to stay up top, but I saw a rope by the fence so lowered myself down for a closer look. After exploring the rocks, I decided to try coming back up the steep slope an ‘easier’ way so I scrambled up a grass bank on my hand and knees. It got increasingly difficult until it was impossible to go on. I turned round and discovered that I was 40ft above rocks and not able to get back the way I’d come. I was stuck and scared. The upshot was that I had to call the coastguard to rescue me and it took 16 men and a helicopter to get me to safety. At one point, a bloke called Steve was winched down to me. He put me in a harness and then we chatted as we waited for the chopper. It turned out he was a lapsed Baptist and I was sharing with him about how I’d been reading earlier that day about a lifeboat rescue being an analogy of God’s salvation and now I was getting a demonstration! He said “I bet you were praying a lot while you were waiting. Did God tell you he was going to send an angel called Steve?”!

I learned a lot from that experience. It was a vivid picture of the rescue that God has brought about through Jesus. I’d got into a life-threatening situation through my own stupidity; I was helpless to save myself; my rescue was costly and yet I couldn’t pay for it myself and I hadn’t deserved it or earned it. The coastguard gave me a glimpse of God’s grace that day and I will be forever grateful.

The other lesson I learned is that I’m sometimes impatient and frustrated with people who make bad decisions and get themselves in a mess. God reminded me that I’m perfectly capable of being an idiot too! It was a humbling experience and has given me a renewed compassion for those in need.

I have had a number of opportunities to share the gospel since my experiences, and to point to Jesus' ultimate rescue.