Posted by Anne Witton on Monday, September 19, 2016 Under: Books 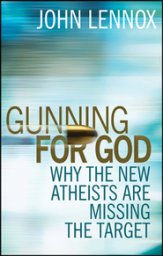 I'm a big fan of John Lennox and really enjoyed Gunning for God: Why the New Atheists are Missing the Target: A Critique of the New Atheism. Lennox is learned, intelligent, rigorous and writes with clarity and wit. Here he tackles the seductive arguments of the likes of Dawkins, Hitchins, Dennett and Hawking and argues robustly that intelligent people can put their faith in the evidence for Christianity and enjoy a vibrant faith that is anything but 'blind'.

To give you a flavour of the book, here are some of my favourite bits.

On the paradox of New Atheism:
"New Atheism is a belief system which, ironically, provides a classic example of the blind faith it so vocally despises in others."
p.15

Quote from Nobel Laureate Steven Weinberg expressing the New Atheist manifesto:
"The world needs to wake up from the long nightmare of religion... Anything we scientists can do to weaken the hold of religion should be done, and may in fact be our greatest contribution to civilisation."
p.18

On science requiring faith:
"Thus, faith in something that has not yet been proved still is, as it has always been, a prerequisite to scientific investigation of the universe. Shall we therefore accuse science of irrationality? Of course not!"
p.50

On tarring all 'religions' with one brush:
"Millions of moderate people of all religious persuasions will, rightly, strenuously object to being classified by the new atheists along with violent extremists."
p.60

On atheist atrocities:
"It would therefore be unwise to forget that attempts to obliterate belief in God had been made before – and have only succeeded in obliterating human beings."
p.92

On altruism going against 'survival of the fittest':
"It is very difficult to see how a mindless evolutionary process could explain the deep-seated ubiquitous moral conviction that we have a duty to support those very people who, in the nature of things, are most liable to inhibit, or even to threaten, evolutionary "progress" – the week, the handicapped, the ill, the aged."
p.109

On judgment and God's nature:
"A God who did not judge evil would not be a God of mercy, love, and compassion."
p.134

On atheist mockery of the Christian message:
"Many prominent atheists content themselves with crude, dismissive, and puerile caricatures of the very message that, for centuries, has brought hope, forgiveness, peace of mind and heart, and power for living to multitudes of ordinary men and women."
p.145
"Mockery is not an argument. It is an attitude, and it does no credit to the person who employs it."
p.166

On miracles and belief:
"The early Christians were not a credulous bunch, unaware of the laws of nature, and therefore prepared to believe any miraculous story, however absurd."
p.174

On explaining the early church if the resurrection isn't true:
"If we reject the early Christians' own explanation for their existence, on the basis that it involves too big a miracle, what are we going to put in it's place that will not involve an even greater strain on our capacity for belief?"
p.180

On examining ALL the evidence:
"The open-minded attitude demanded by reason is to proceed now to investigate the evidence, to establish the facts, and be prepared to follow where the process leads; even if it entails alterations to our preconceived ideas."
p.184

On the ways that God is revealed:
"The Bible speaks clearly of at least three distinct ways in which God reveals himself to human beings: (1) through creation, (2) moral conscience, and (3) through the written revelation of Scripture."
p.227

Response to Dawkins' Douglas Adams quote at the start of the God Delusion - "Isn't it enough to see that a garden is beautiful without having to believe that there are fairies at the bottom of it too?"
"Does Dawkins really believe that there's no gardener?"
p.230

Summary of atheism vs Christianity:
"Atheism has no answer to death, no ultimate hope to give. It is an empty and sterile worldview, which leaves us in a closed universe that will ultimately incinerate any last trace that we ever existed. It is, quite literally, a hope-less philosophy. Its story ends in the grave. But the resurrection of Jesus opens the door on a bigger story. It is for each one of us to decide whether it is the true one or not."
p.231
I thoroughly recommend this book to anyone who wants to have a thought-through response to the criticisms of the New Atheists.