Isn’t it all about rule-keeping?

Posted by Anne Witton on Thursday, January 17, 2019 Under: Reflections 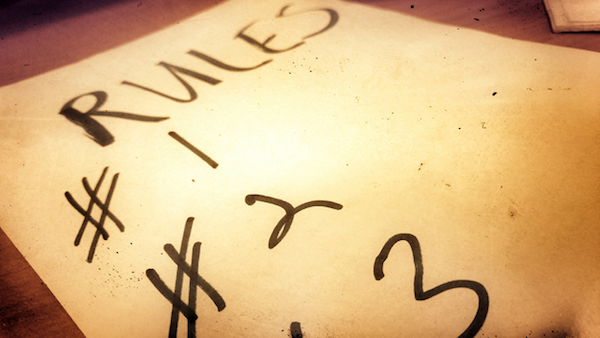 This is a question I’ve been asked a number of times recently when it comes to my Christian faith. It is a common perception that Christianity is about trying to be good by following a set of rules so that you will earn a reward and avoid a punishment. Many people see Christianity as a reward-based religion, but in fact nothing could be further from the gospel of grace. All other religions have essentially the same basis - that humans try hard to 'be good' or obey commands and then maybe if they've done enough they'll get some celestial reward.

Christianity says the exact opposite - we’ve all strayed from God’s blueprint for how we should live, but Jesus has lived a perfectly good life and we can be reunited with the Heavenly Father we have rebelled against if we accept his freely-given forgiveness. Because this doesn’t depend on our achievements, we have a certainty that nothing will separate us from him.
For I am convinced that neither death nor life, neither angels nor demons, neither the present nor the future, nor any powers, neither height nor depth, nor anything else in all creation, will be able to separate us from the love of God that is in Christ Jesus our Lord.
Rom 8: 38-9
It's very clear in the Bible that being right with God is not a matter of keeping rules or moral codes. In fact, the Apostle Paul makes the point that a list of rules simply has the effect of showing us that we're not perfect and has absolutely no power to make us good.
Therefore no one will be declared righteous in God’s sight by the works of the law; rather, through the law we become conscious of our sin.
Romans 3: 20
What Christianity is all about is transformation of the heart. God works in us to change our rebellious nature into a new nature that wants to live for him.
I will give you a new heart and put a new spirit in you; I will remove from you your heart of stone and give you a heart of flesh.
Ezekiel 36:26
When we love God, we live to please him, not because we're afraid of his punishment or are trying to earn his favour, but because we delight in him and enjoy the forgiveness, freedom and loving relationship that he's given us.
If you're married or have a good friend, you want to do things that you know will make your spouse / friend happy, not because you want a reward, or you're afraid of their anger if you upset them, but because you love them. It brings you joy to come home with a surprise bunch of flowers, or make them breakfast in bed, or push them around in a wheelchair when they've broken their leg, or let their tears and snot soak into your shoulder when they're in pain. It's not something you grudgingly do because it's your 'duty'. That's exactly the same with a Christian's relationship with God. They enjoy worshipping him, being kind to others, giving generously, spending time with difficult people, helping the poor etc. because they love Jesus and his love flows through them to others.