Posted by Anne Witton on Monday, January 12, 2015 Under: Reflections
Last week I was at the lovely Shallowford House for the New Staff Training Retreat, along with the other first year staff and interns. It was a great time of learning together, praying and having some retreat time to seek the Lord. 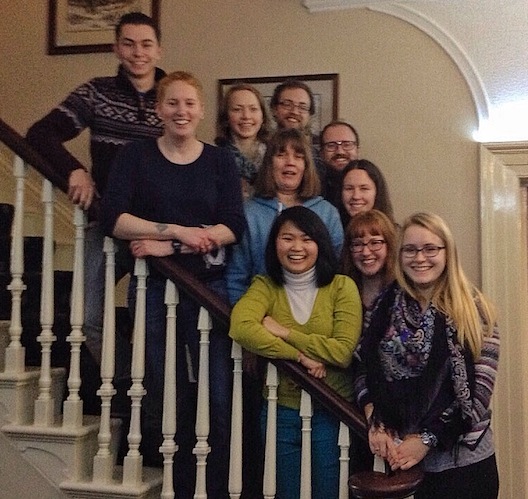 One of the things that we did was look at the heroes of faith in Hebrews 11, so it was fitting that that was the passage I'd chosen to do my devotional on when we arrived.

Here's what I shared:

Hebrews 11 gives an account of men and women of God who have accomplished great things in his name. The people on the list include Noah, Abraham, Sarah, Isaac, Jacob, Moses and Rahab, as well as countless others who aren’t named individually.

Here are a few highlights:

Now faith is confidence in what we hope for and assurance about what we do not see. This is what the ancients were commended for...
By faith Noah, when warned about things not yet seen, in holy fear built an ark to save his family. By his faith he condemned the world and became heir of the righteousness that is in keeping with faith.
By faith Abraham, when called to go to a place he would later receive as his inheritance, obeyed and went, even though he did not know where he was going...
By faith Moses, when he had grown up, refused to be known as the son of Pharaoh’s daughter. He chose to be mistreated along with the people of God rather than to enjoy the fleeting pleasures of sin...
By faith the prostitute Rahab, because she welcomed the spies, was not killed with those who were disobedient...
These were all commended for their faith, yet none of them received what had been promised, since God had planned something better for us so that only together with us would they be made perfect.

This is one of my favourite passages of scripture and has been a lot of encouragement over the years. There are two things that I wanted to share:

(1) I love the fact that we’re part of the story that God is writing through history and we can be encouraged by those ordinary people who have gone before us and done extra-ordinary things for God.

When I first became a Christian at university, I thought of it very much as a private faith to do with my individual morality. Through this passage and the teaching about the Body of Christ in 1 Corinthians 12 I’ve learned that Christianity isn’t individualistic and it’s not restricted to a particular time or culture. God has been at work amongst his people since the dawn of creation and I felt really overwhelmed when I first realised that I’m part of the same family as Adam and Eve, Abraham, Moses and all the other spiritual heroes!

(2) I also love the fact that it’s quite a motley crew including adulterers, murders and a prostitute. Over the years, God has been showing me that it’s not us and our achievements that qualify us to be used by him, but it’s his calling, redemption and power that make weak and fallible people able to work for his kingdom.

When I was growing up I came from a very achievement-based background. There was little room for failure and my worth was measured in terms of success and merit. When I’ve failed at things or really messed up in my life, I’ve been tempted to think that I’m useless or worthless.

This passage is a huge encouragement that failure isn’t the end. God takes broken, weak and fallible people and he forgives, heals and transforms them. There aren’t many recruitment agencies that would see ‘prostitute’ on someone’s CV and still give them a job, but God can use anyone when they put their faith in him. We don’t have to be perfect, or super-spiritual to do God’s work. We just have to be obedient, knowing that his power is sufficient for us.

I often feel inadequate and wonder whether I’m up to the task. As I’ve been reflecting about starting full-time ministry, there’s been a mixture of excitement and nervousness. Will I be able to do it? Looking at this passage again has reminded me that to be used by God I don’t need to be amazing, I just need to be available, so I echo one again the cry in Isaiah 6: 8 “Here am I. Send me!”