Posted by Anne Witton on Thursday, April 23, 2015 Under: Move magazine
If you're an Agapé supporter, you will hopefully have received the latest edition of Move magazine full of fascinating articles, ministry updates and prayer points. The article to catch my eye this time was written by my friend Joel who is on staff in Birmingham. Here he challenges us to be open to ridicule for our faith: 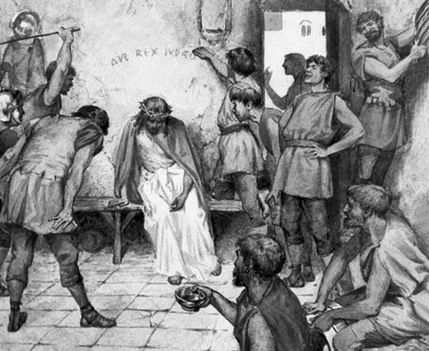 Two thousand years ago Jesus and his message were frequently ridiculed. Today if Jesus is mocked should Christians protest and demand respect or grin and bear it, or neither?
When Jesus died on the cross it was with an ironic crown of thorns on his head and a sarcastic sign above his limp body mocking him in three languages: ‘King of the Jews.’ Good Friday was a day of mockery and abuse as well as death.
Every step Jesus took, every tear he shed, every piece of fish he ate bore witness to his humanity. Although he had attributes lacking in other humans he was, like us, mockable, vulnerable, even killable. Each of the four gospels give details of the shame and derision Jesus experienced (Luke 23:11).
Not only did Jesus face ridicule, but he warned his followers that they would endure it too:
“If the world hates you, keep in mind that it hated me first.” (John 15:18)
“Blessed are you when people insult you, persecute you and falsely say all kinds of evil against you because of me. Rejoice and be glad, because great is your reward in heaven.” (Matthew 5:11-12)
How we respond to ridicule is arguably one of the most powerful and persuasive statements we make about our faith and our Saviour. Can we respond in a jubilant way as Jesus commands? Can we take the long view, forfeiting earthly retaliation in favour of a heavenly reward?
Ridicule is hard to bear because it is an often- public affront to our humanity and our deepest values. As a disciple seeing or hearing Jesus being mocked in popular media or having my sanity questioned by antagonistic atheist academics can get the blood boiling.
Yet for Christians, whose emblem is a cross, shouldn’t ridicule and suffering be normative? If we’re not perceived as outsiders and fools [for our faith] are we truly followers of Jesus? Many generations of Christians perceived mockery as an honour. Do we?
We’re in an era in which each interest group in society fights its corner ready to condemn any insult that flies its way. Krish Kandiah, president of London School of Theology, reminded me that Jesus’ followers have an amazing opportunity to speak up for others, especially those without a voice, rather than constantly defending our own “rights.” Fighting other people’s corners is very counter-cultural and a sign of genuine love and generosity.
So are we society’s punching bags? Maybe we are. Standing with the marginalised, the institutionalised, the leper, the prisoner and the asylum seeker might mean being mocked for our association with them as well as for our faith. Brendan Manning wrote, “Obedience to the Word will leave us weak and powerless in the world’s eyes because we can no longer call upon our possessions and privileged positions as security. We will be subject to derision and outrage because authentic discipleship is a life of sublime madness.”
The final lines from Edward Shillito’s poem ‘Jesus of the Scars’ show us the absolute uniqueness of Jesus and his incarnation:
The other gods were strong; but thou wast weak;
They rode, but thou didst stumble to a throne;
But to our wounds only God’s wounds can speak,
And not a god has wounds, but thou alone.
His humanity, his vulnerability and his wounds in the world’s eyes denote failure and shame, but for us they are the path to a grace-full, glorious kingdom that atheists, cynics and ISIS militants deem as thoroughly ridiculous.