Schwellanangst - 'Fear of the Threshold' 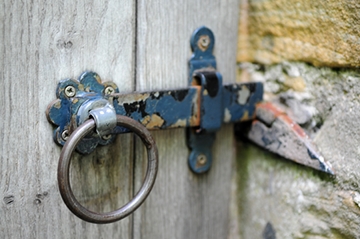 When I worked for Voluntary Arts, the Chair of our Board, Peter Stark popped in to visit us and we had a very nice conversation (and some lovely M&S bakewell tart biscuits!). One of the things he said really got me thinking. He told this little story...

Peter has always wanted to go into a betting shop and put a bet on a horse. He's a self-confident, extrovert, middle-aged older man [his words, not mine!] who helped develop The Baltic and The Sage, was awarded an OBE and ran a successful company in South Africa. So he's not backwards in coming forward. And he really wants to put a bet on a horse. So what's stopping him? According to Peter, it's 'schwellanangst' or the 'fear of the threshold'. It's that horrible feeling you get when you wander in somewhere and you realise you're the only one who doesn't know the 'rules'. There are the windows that are difficult to see through, there are the (mainly) men, sitting around the edges of the room, knowledgeably studying the Racing Post.

The reality is that Peter has no idea how to go about putting a bet on a horse, and you can't very well go up to the person on the desk and ask them without feeling foolish.
Peter was using this story to highlight the things that put a lot of people off getting involved in the arts and crafts. Lots of arts venues can be a bit intimidating. If newcomers do summon up the courage to get past the door, they’re often unsure of what to do and make a beeline for a rack of leaflets which is a safe place from which to tentatively survey the area and work out an action plan.
It seems to me that schwellanangst is that tumbleweed moment when you feel like all eyes are fixed on you, the jukebox has gone silent and you're just waiting for someone to say "You're not from round here are you?". Understandably, most of us feel pretty uncomfortable in these types of situations. Yet we might not be aware of when we're making others feel like this.
I remember going along to a badminton club once because I fancied doing a bit of sport and getting to know some new people. Unfortunately, the experience was a total disaster. They had some sort of complicated system for deciding who plays with whom on what court and no one explained it to me so I spent a lot of time standing around wondering when I was going to get some badminton action. Eventually, a lady wrote my name on a chalkboard and I got called up to play. It was a doubles game and my partner wasn't very happy with me because I apparently didn't have the right stance when I was receiving serve. I only got one game because no one wanted to play with Dodgy-Stance. Needless to say, I never went back.
I was thinking about how we can make church more inviting for people and how we can help people cross the threshold and feel like they belong straight away. In our increasingly secularised society, we can't take familiarity with church traditions for granted any more and church can be one of the most threatening places to be for an 'outsider'.
Our church meets in the bar / gallery area of a theatre which at least removes the 'unfamiliar building' obstacle (although asking people to come into a 'closed' meeting is still getting them to cross a threshold which may be very uncomfortable.)
I'm a firm believer in being church 'out there' - wherever we happen to be. Doing social things as a group of Christians and inviting other friends along is a natural way to share faith without the need to embarrass anyone. This is something our church is really good at and I hope we continue. If people have met other friends from church, it makes it much easier to invite them on a Sunday as there will be people there they know which immediately put them at their ease.
Then there are some easy ways that we can make our church services less threatening for newcomers:

Maybe if we are all more mindful of what it’s like to be in an unfamiliar environment and do what we can to put people at ease then we can banish schwellanangst once and for all!